No doubt The Jimi Hendrix Experience opening up for the Monkees was a real boner! And a young and aggressive Van Halen opening up for an inebriated Ozzy with a burnt-out Black Sabbath certainly pitted the aged with the new.

But the all-time biggest mismatch I ever saw was rock group K.I.S.S. at The NBC Arena in Honolulu, with Hawaiian comedy act ‘Booga Booga’ as the openers. That’s right, a comedy act! K.I.S.S. was tearing up the States supporting “Alive”, their first real breakthrough for the band and their label Casablanca Records. They were bound and certainly determined and weren’t going to be denied. The local radio stations had been promoting the date Feb. 29, 1976. 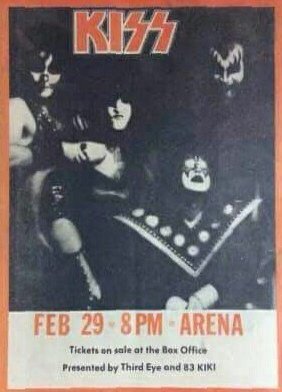 Many K.I.S.S. fans were aghast that a ‘comedy act’ without music would open up for the hottest group in the land. No guitars, no drums, only comedy. When the lights went out that night and Booga Booga took the stage, the crowd let ‘em have it. I never heard such a chorus of boos in my life! It was so loud and so long, you couldn’t hear a word the comedians were saying. You couldn’t even talk over the roar! They never stopped the reign of ruin until Booga Booga scooted off the stage. It was one continuous “Boo” for 25 minutes straight! The audience wanted no part of it. They were pissed! I mean, C’mon. What were they thinking anyway?

The K.I.S.S. “Alive” tour had been rolling along into 1976 with opening acts such as Mott, Rush, Point Blank, and Montrose. It all depended on the dates. Even those bands were having trouble supporting K.I.S.S. But a comedy act? What screwball promoter did that? Yes, that had to have been the biggest mismatch I ever saw in my life!