This is a band (named after the English agriculturalist and inventor) formed in 1967 that started as a Blues Rock/English Folk band, added some elements of Jazz Fusion and became one of England’s premier Progressive Rock bands of the era.

Founder Ian Anderson has kept the band going with a seemingly revolving door of musicians in and out, but the soul of the band is Anderson, the one-legged flute player, given that nickname because of his tendency to do this while playing: 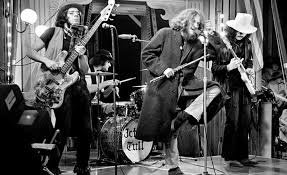 I was immediately enamoured with this band as a young man in the early ’70s. Their style suited me. Their music was a combination of hard chords and simple acoustics, along with the flute, of course, that just seemed to express history, mystery and the commonplace experiences of life. Their characters, “Aqualung”, the “Teacher”, the “Locomotive Breath”, “Fat Man”, and “Cross-Eyed Mary”, all were immediate and identifiable. And the music was amazing.

So, not to belabour the answers already here, I think I must give my favourite song, since the obvious answer as Signature Song is “Aqualung”:

How did the Doobie Brothers go from such a rock ‘n roll sound early on to such a smoother, bluesy sound over the course of the 1970s?
Tagged as Authors Cool music Music News Singer