What is the best rock group to come from Scotland?

That would be, in my opinion, the Sensational Alex Harvey Band. 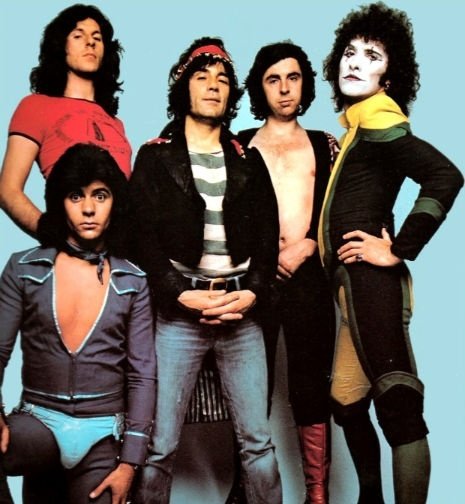 How can I describe the effect of the Sensational Alex Harvey Band to those who have never heard their sassy, sardonic, glorious, nasty, visceral appeal?

… It’s kind of like the young Bertolt Brecht, but unlike the real one, one who could actually sing, grew up in Glasgow and apprenticed himself in the 50s and 60s music, and then found a bunch of young prog-rock musicians, and told them Do what ah say and play kickass rock and roll and be prepared for any f***in’ thing, and we’ll slay them in Cleveland, Ohio and become a cult favourite!

The SAHB only lasted six years, 1972–1978, but in that brief time they put out four great albums and four more (well, maybe two or three more) decent ones. The internet has fumblingly attempted to categorise them as ‘glam rock, but they really weren’t. (Nothing against the glam rock, it’s just that the SAHB don’t fit the label.)

Alex Harvey was one of the older generations of British musicians to come of age in the 1960s.

He was born into a working-class family in Glasgow in 1935—he was only a month younger than Elvis—and he managed to avoid National Service (conscription) by registering as a conscientious objector, as his father and grandfather had both done.

He worked in a variety of blue-collar jobs, before the rough & ready form of acoustic rock and roll known as ‘skiffle’ came along, and proved his salvation. Though, it did take a long time.

Alex Harvey and his Big Beat Band appeared at the Town Hall, Alloa in May 1960, opening for Johnny Gentle and his Group. Johnny Gentle’s ‘Group’ at the time was five herberts from Liverpool surnamed Lennon, McCartney, Harrison, Sutcliffe and Moore. If Harvey experienced this at the time as a brush with greatness, he doesn’t seem to have said so.

If the Beatles re-recorded all their songs like John Lennon wanted to do, how well do you think they would have turned out?

Throughout the late 50s and the first half of the 60s, he plugged away at bringing R&B to audiences in the UK and Germany, without achieving great fame. Remember, this was the 1960s when practically any mediocrity with a guitar and an English accent could achieve the spotlight. Perhaps Alex was just too Scottish.

He went solo in 1965, but there was nothing particularly distinctive about his career until he scored a gig in the pit band for the West End production of the musical Hair.

Hair was pretty groundbreaking for its day, what with the anti-war message and the free love and the nude scene, but at some point during its run, Alex Harvey seemed to realise that what his career needed was a little bit less sturdy rock and roll authenticity, and a little bit more… pzazz.

A touch of showbiz.

Observant readers will have noticed that in both the video and the picture, Alex is wearing jeans and a black and white hooped shirt.

That was his costume.

Guitarist Zal Cleminson wore clown makeup. The other three guys pretty much put their heads down and played, but they played well. This band could rock:

The SAHB, as they were known, were able to project an air of leering menace while being at the same time hugely entertaining. Harvey himself was a self-educated intellectual who would read ‘a book a day’, according to his widow, and never headbutted anyone who wasn’t seriously asking for it.

They caught the ears of future rock stars who were young in the mid-70s. Nick Cave was a huge fan, as was Robert Smith of The Cure, and it’s a testament to both their originality and Harvey’s own, that neither of them really resemble him.

They covered songs by people as diverse as Leadbelly (‘Goodnight Irene’), Jacques Brel (‘Next’) and the Osmonds (‘Crazy Horses’). But their own songs were the best, with Harvey’s comic-book imagination coming to life in songs like ‘Vambo Marble Eye’ and ‘Give My Compliments to the Chef’. The SAHB could be funky and jazzy, and it could drop into a 30s pastiche pop song or it could make a lot of noise. It was a band for almost all seasons.

It all went a bit south, with Harvey leaving his own band in 1976 and rejoining it the following year. They did their last gig with him as frontman in 1981.

As with many musicians of his generation, Alex Harvey felt a bit lost in the midst of punk. He died of heart failure in 1982 while on tour in Belgium, the day before his 47th birthday.

I could make pretentious claims about the achievements of the Sensational Alex Harvey Band, but I’d hear Alex Harvey’s mocking chuckle if I did so. Their music was both ironic and sincere, trashy and grand, fun and frightening.

Their last genuinely great album was I think their fourth, Tomorrow Belongs to Me, with its themes of environmental destruction and social breakdown, very on point for the UK in 1975 (two years after the first oil crisis.) The title track, a cover of the pastiche Nazi song from Kander & Ebb’s Cabaret, is ominously beautiful; the fact that the same song has been used unironically by actual neo-Nazis is a sign of how some people are completely uninterested in context. (If ‘Tomorrow Belongs to Me’ were an actual Nazi song, it would be by far the prettiest ever written, but the fact that it was written as part of an anti-Nazi musical by two gay Jewish men does rather complicate matters.)

In the meantime, there’s Framed, Next and The Impossible Dream, which with the aforementioned are four of the most underrated albums of the 1970s.

I don’t think any Scottish band has ever matched the SAHB for its combination of power, guts, wit, soul and sheer, well, raunch.

Even when they go full bagpipes, it still works: