This is an almost impossible question to answer. Three favourite heavy metal songs ever from the 60s and 70s! The 60s are easy since they had hard rock but not heavy metal yet, but in the 70s: There are so many incredible songs!

I’ll give it a shot. 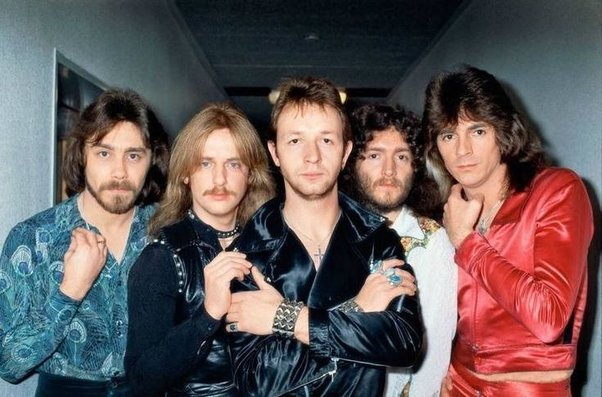 The main guitar riff is classic. It’s based on the blues, as the best rock music usually is and make no mistake about it, heavy metal is rock. It’s an aggressive style of rock that puts a premium on virtuosity, but it is rock music. Heavy metal just ups the intensity.

The vocals by Rob Halford are a great example of “putting a premium on virtuosity.” Nobody was singing like that back in 1976 except maybe Ian Gillan to some degree but still, Rob Halford sounded pretty different from Gillan. Their similarity was that Gillan also hit very high notes in an aggressive way.

Rob Halford may be reminiscent of Ian Gilan on the highest notes, but in the lower registers, he sounds entirely different. Rob Halford’s voice is unmistakable.

This song tells the story of a once beautiful woman who is ravaged by her alcohol abuse and it’s a powerful theme that is as relevant today as it was 48 years ago when this song was released. Here’s a live version of it I especially like. The tons of dry ice makes it even better!

The interlude of the song is my favourite part. The lyrics are great. The music is great. The singing is exactly what it needs to be to get that particular emotion across. Dynamics are crucial to a band, especially a heavy metal band. What’s loud without soft?

The second song on my list is Stargazer by Rainbow. Not every song by Rainbow sounded like heavy metal. A lot of Rainbow was really more hard rock than heavy metal, but there’s no doubt about it: Stargazer is a heavy metal classic.

You get possibly the greatest heavy metal vocalist ever in Ronnie James Dio and pair him with a guitarist the stature of Ritchie Blackmore and there’s gonna be fireworks!

There were fireworks. The band with Dio as frontman only lasted for three studio albums and a live album before Dio left. Why did he leave? He said he didn’t want to sing songs about Ritchie’s romances. Predictably enough, after Dio left Rainbow, they wrote a lot of love songs. Dio wrote few if any love songs after leaving Rainbow. Dio was fascinated with topics that were more substantial, such as the struggle within man between good and evil.

While Dio and Blackmore didn’t work together for a whole long time, they made some great music together. They both have reputations as being difficult to work with because they both have a reputation for wanting complete or near complete creative control. That’s what happens when you’re a musical genius: You have a vision and you know just the way you want it to go.

Coming in at third on this list is a song that made it on here because I want to include one song by the band that invented heavy metal: Black Sabbath. Judas Priest has a bunch of songs from the 70s that I like better than this one, but Black Sabbath is an important band and a band that I have enjoyed a lot. I’ve been to see them live. The last time I saw them was their reunion at Ozzfest ‘97.

I’m tired of people bringing up the same three songs over and over again – all of them from the same album. Yes, their second album is a classic album, but I’ve heard those songs so many times. They were just about the only Black Sabbath that the radio would play and that’s a shame because they had other great songs too!

The song I’m choosing by Black Sabbath is Megalomania from the album Sabotage:

I chose Megalomania for the atmosphere the band creates at the beginning, which then recurs later in the song – that trippy, very drug-induced sound that’s so alluring. It’s a little bit like being able to enjoy a drug without the side effects. What band would know more about drugs than Black Sabbath?

Which artists or bands experienced greater commercial success after changing the genre of music they began their career with?