If you’re talking playing-wise, ‘Hell No’…

He is a solid groove, pocket player. One of the best! You can’t play on 100 plus million records and be a slouch. It doesn’t work that way. Mick has been laying it down since the early 60’s playing in local London bands until he got a stint in the legendary John Mayall’s Bluesbreakers with future Fleetwood Mac vets John McVie and Peter Green.

below: Mick Fleetwood and kit! 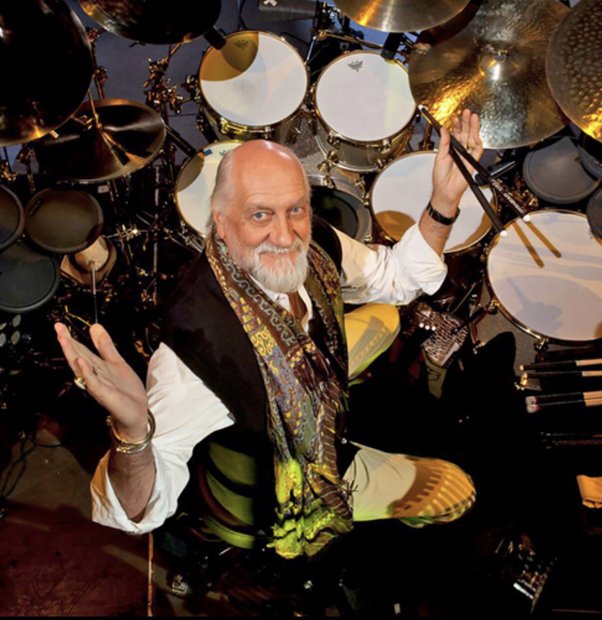 Well as the story goes, both Fleetwood and McVie were fired from the band, but soon enough Mick, John, and Peter formed Fleetwood Mac and began to gig. After several records and several early lineups, Mick considered moving the band to the West Coast. And while here in California, he met up with Lindsay Buckingham and Stevie Nicks and well, the rest is history eh? Mick has been recording and touring for almost 60 years. His straightforward, no-nonsense approach to drumming has made him a fan favourite for decades. He might not be the first drummer that comes to mind when you think of drumming, but if you want a percussionist that knows how to lay it down, and can give you a hitting groove and feel, he’s your guy.

Haha, he can play in my band anytime! Now financially speaking, Mick admitted to filing for bankruptcy some years back. He claimed to have spent “several million dollars” on drugs and a terrible lifestyle. Fleetwood likened himself to Donald Trump, saying that he has filed for bankruptcy many times! The first was in 1984. How is he doing now? Since then, he appears to have cleaned up his act and has made a steady living not only with Fleetwood Mac but also with his own band, The Mick Fleetwood Blues Band. But his past drug addiction, poor business practices, and being a non-songwriter has definitely limited his ability to maintain a hold on his nest egg. Mick says he takes it one day at a time.