How good of a songwriter was Paul McCartney?

He could write a very good song about anything on the spot!

In 1973, when Paul and Linda McCartney went on a vacation to Jamaica, they learned that a Hollywood picture entitled Papillon starring Dustin Hoffman and Steve McQueen was being shot there.

They visited the set of the feature film on location, met the stars, and Hoffman invited the couple to dinner. 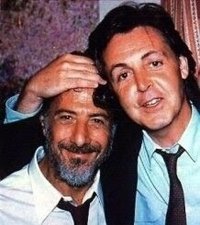 Over dinner, Hoffman asked McCartney how he wrote songs.

McCartney replied, “I just made them up.”

Hoffman was very impressed, “Oh, just like that? You just made them up.”

Hoffman then produced the April 23, 1973 issue of Time Magazine with an article about “Pablo Picasso’s Last Days and Final Journey” and challenged McCartney:

“And can you write a song about that?”

The magazine article reported that Picasso had told his friends, “Drink to me, drink to my health, you know I can’t drink anymore”, then he went to bed and died in his sleep.

McCartney picked up a guitar, started strumming, and right there and then, quickly made a chorus out of the quote!

Hoffman would later say that the experience was “right under childbirth in terms of great events of my life.”

And that was how Sir Paul McCartney composed the song “Picasso’s Last Word (Drink to Me)” – one of the outstanding tracks in the phenomenal 1973 album “Band on the Run”.

What is the best rock group to come from Scotland?
Tagged as Music News

Who would you consider the better drummer, Ringo Starr or Keith Moon?