Did Harrison Ford really work with Jim Morrison and The Doors? 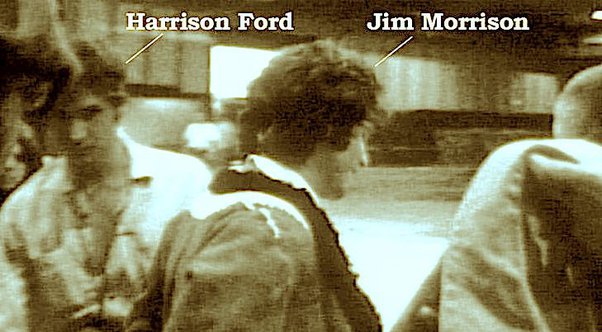 Yes. And Harrison Ford later (jokingly) said that the experience almost sent him to a Jesuit monastery.

The year was 1968. Ford, as Harrison Ford lore goes, was busy working as a carpenter. He was trying to break into the industry though. He had a few bit parts in movies, but that was it.

In 1967 and 1968, he had somewhat featured roles in A Time for Killing and Journey to Shiloh.

When 1968 hit, his old friend from UCLA, Paul Ferrara, offered him a job as a second cameraman for a concert film featuring the band The Doors. In 1968, the Doors were huge. The concert film was entitled Feasts of Friends.

Ford didn’t know how to operate a camera though. So he went through some quick training at the Sixth Annual Renaissance Pleasure Faire in Agoura, CA. Band members John Densmore and Robby Krieger were also there.

After his crash course in camera work, he was hired to go to the Northern California Folk-Rock Festival to film the band.

Ford talked about the experience via a 1980s interview. He said:

“I worked on a road tour film of The Doors, we went around for about a week and a half. A concert tour. When it was over, I was one step away from joining a Jesuit monastery. I thought it was cool, I thought it was hip, but I couldn’t keep up with those guys. It was too much… I was part of the camera crew, second camera. I don’t think any of it was in focus [laughs]. Not a bit of it. Those were the old days.”

Here is a video of Ford and Jim Morrison (and the band).

Here’s another one that features Ford working the clapboard and saying, “Take One.” Morrison is in the background facing the camera.

No official word from Ford on what he thought about Oliver Stone’s The Doors movie. Although the concert film that he helped shoot is often pointed to as what Jim Morrison was really like, beyond Stone’s wildly enhanced writing and directing portrayal of the singer (but Val Kilmer was amazing in the role).

Is there a rock musician who got fired from their band who wound up being bigger than that band?

If Elvis Presley was the King of Rock ‘n’ Roll, why didn’t he perform at Woodstock?