While most of the answers are right regarding lower string tension, they forget one important point. 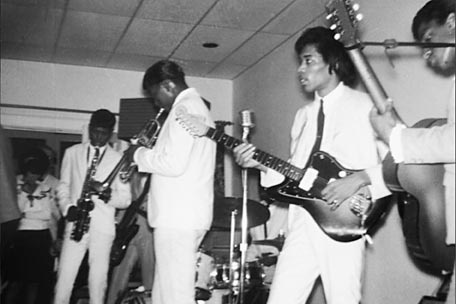 I’d never seen him with a Jazzmaster before! Jimi in his days as a “guitarist for hire” on the Chitlin’ Circuit

Jimi spent his early career drifting between various R&B bands, racking up stints with Little Richard, Ike Turner, Jackie Wilson, the Isley Brothers; basically anyone who would pay him, for as long as they would put up with his shit. Despite his antics, he was never the featured musician. In most of those bands, the key guys to their sound were the guys on the left of that photo – the horn section.

Saxophones, trumpets and trombones are most commonly produced in Bb or Eb, so when your job is to fit in around the horn section, it’s an awful lot easier to tune down to Eb and play; after all, they can’t just tune up to E without some serious metalworking!

Drake Joins Smiley on New Song “Over the Top”: Listen