After their pure rock and roll start, what influenced the Beatles to write a number of acoustic guitar-based songs?

The Beatles didn’t have a ‘pure rock and roll start’. 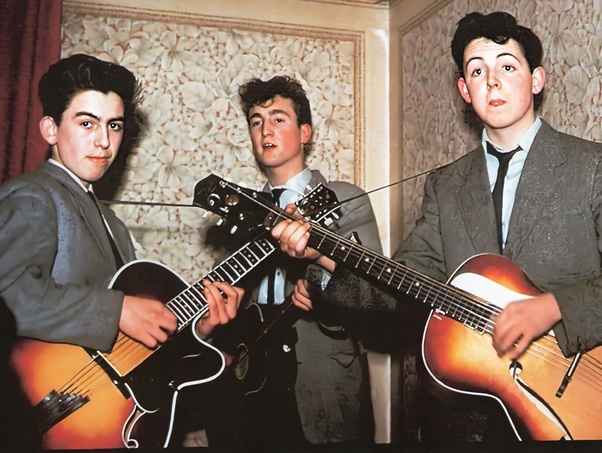 I only just noticed that Lennon is actually holding a guitar in this picture. In previous versions of it, it had been reproduced so murkily that his guitar was invisible.

The Beatles started out playing skiffle, a high-energy but acoustic blend of folk, country and early rock and roll.

When they started out, they couldn’t afford electric guitars. That guitar that Lennon’s holding looks to me like his Gallotone Champion, which somehow survived the early Quarry Men years and was auctioned off in 1999 for £155,000.

In the 1970s, who was the most physically attractive musician?

I’m not sure exactly when they first acquired electrics, but they certainly had them by 1960, by which time the original trio above had been together for over two years.

Even when they did acquire electrics, they often preferred hollow- or semi-hollow-body guitars, such as Lennon’s Rickenbacker 325 (which was hollow, but his model didn’t have a sound hole), McCartney’s Höfner 500/1 bass (also hollow but without a sound hole), the Rickenbacker 360/12 which both Lennon and Harrison used, and the Epiphone Casino, which they all owned and used extensively, and which is at the core of their sound from 1965–1969. Lennon’s Casino became overwhelmingly his main guitar from 1966 onwards.

Then there’s the Gibson J-160E with they used a lot in the studio: 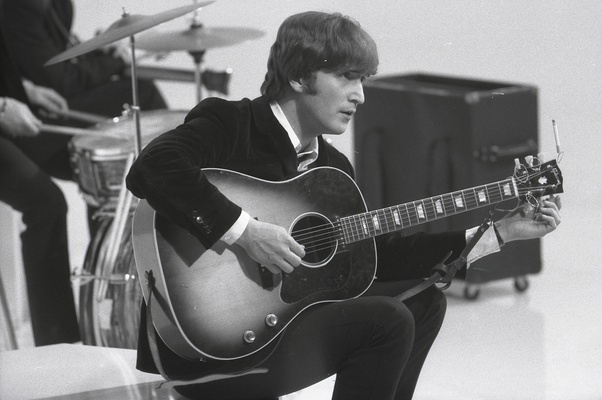 So, the Beatles were always associated with acoustic or semi-acoustic instruments, even on their earliest records.

When they later came to prominently feature acoustic songs on Beatles for Sale, it’s because they had begun to be influenced by the sound of Bob Dylan’s recordings, and other folk music, and had begun to want to change their own sound away from the more electric Beatlemania style of their early recordings to something a little more reflective and intimate.

What are some fun facts about John Lennon?

They didn’t manage it very well on that album, which was made when they were exhausted from touring and recording, but by the time they made Help! they had recovered some of their energy.

The Beatles’ career-long preference for acoustic or acoustic-electric instruments is a big feature of their sound, and is one reason why their music tends to be more intricate, more textured, and less massive than that of most of their peers.

Who do you think is the biggest jerk in rock and roll?