By Antonello Frau: –
What are some facts about Black Sabbath that even the most hard-core Sabbath fans may not know?

Here is a cool one. Let me try to chip in.

Back in the 1978, Black Sabbath were past their prime. Personal issues, substance abuse and dramatic changes in mainstream music had put them a bit away from the spotlight: it was the height of several “anti-rock” eras (disco and punk, primarily) and rock acts like Black Sabbath, Rainbow or Led Zeppelin were looked at as dinosaurs. They were still there, though, making music and touring. Business as usual.

Black Sabbath published their latest album Never Say Die! in September 1978 but began a US tour in May to publish it. As an opening act, their choice was on a relatively unheard of rock band from California. They had just published their debut album in February and now were more than eager to take on their duties to get heard, known and thus build up that solid reputation the whole wide world would come to know.

During the previous US tour between 1975 and 1976 (the Sabotage tour), Black Sabbath had set out to have Kiss as a fore band. As it turned out, Kiss upstaged Black Sabbath – you know, stage antics, blood spitting and the like: the whole Kiss package. Mindful of what had happened, Black Sabbath’s singer Ozzy Osbourne did actually seek a more “tamable” band (i.e. less memorable) to open his band’s tour that year. Basically, Osbourne was concerned and said “Nope, we are not doing that pas faux again. For the 1978 US tour, we will just be wanting a bar band, that is all”.

The US tour started off on the 16th of May, 1978, with the bar band to open for Black Sabbath. However, it took only that very show for Black Sabbath to realise that, once again, they had booked an opening act that was going to upstage them.

As per Osbourne’s words, “We just went into the dressing room, [and] …That was incredible.” A four piece rock band like nobody else back then with such an energy and straight to the point: hard rock with no BS. In particular, the young guitar player caught the attention of Tony Iommi, Black Sabbath’s guitarist: never seen before technique, unbelievable energy, flashy solos. An amazing guitarist, that is.

Moreover, Iommi soon began to realise that this bar band was drifting a bit far of their league as the tour went on: Black Sabbath knew their support act had been watching them every night and they had started to pick things from them: this is cool, this is not, this makes the crowd go wild, this does not work too much and so forth. Those kids were ripping Black Sabbath off. Some even said Iommi had to have a few words somewhere in a backstage with the band’s guitar hero to tell him “to behave”, otherwise, the rock dinosaurs would be upstaged again.

What is the rift between Mark Knoffler and his former band Dire Straits?

The two guitarists became lifelong friends, but Black Sabbath did get to be upstaged once again.

That bar band was Van Halen: 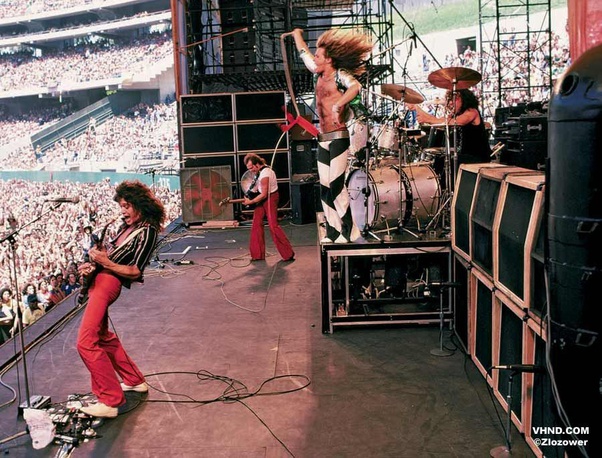