How did Tony Iommi create heavy metal? He created it with the band Black Sabbath. 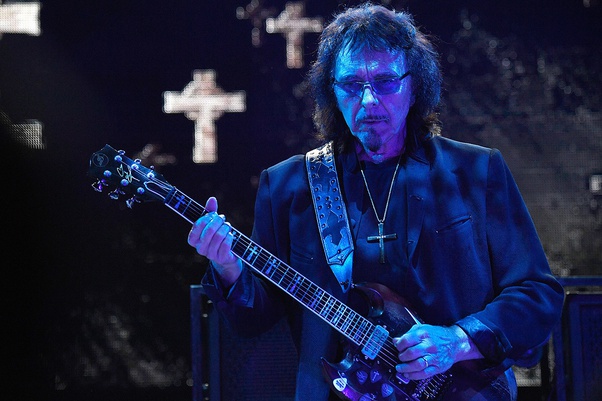 Tony Iommi plays his Gibson SG tuned down to C#. That gives his riffs a heavier sound than they would otherwise have.

Tony Iommi was one of the founders of the band. They started off as a blues/jazz band named Earth. Then one night they played a song they named “Black Sabbath.”

Everyone in the title nightclub where they were playing was just blown away. The band had sure gotten their full attention! The song was one that was blues based hard rock and heavily utilized the tritone. The tritone has an evil sound to it and was named “Diabolus in Musica” (“the devil in music”) in medieval times.

Black Sabbath (the band) did more than use the tritone. They didn’t use it in all their songs or most of them anyway. That’s just one thing they did to create the sound that came to be known as heavy metal.

The primary part of what they invented was the invention of riffs played on a distorted electric guitar that had a heavy sound to them. The distortion came from overdriving the amplifier.

Without distortion there could never have been heavy metal. Amplifiers capable of a desirable type of distortion simply hadn’t been made available before then. There were bands that tried to get that sound by punching a hole in the cone of the speaker, but that created a sound that was more annoying than heavy.

Black Sabbath also had a bassist, Geezer Butler, who liked to overdrive his amplifier. Sometimes he would double the guitar riff an octave lower to give a heavier sound.

Ozzy Osbourne sang lyrics that were about ominous or evil subjects. He didn’t have especially good singing ability but he developed a style of chanting his lyrics that helped him disguise his weaknesses and exploit his strengths.

Bill Ward played the drums like he meant it! He liked to incorporate fills when they fit well and was great at that. Again, the drums were played in a way that made a heavy sound. A heavy sound is something you know when you hear it. You know it in your gut. Here’s a song where Ward does some especially maniacal drumming during and after the guitar solo:

Why were there so many more amazing British rock bands in the 60s and 70s than there were American?

Black Sabbath did all these things with blues based hard rock and created heavy metal. They have influenced countless other heavy metal bands.

The Obsessed are one of the bands that are part of the legacy of Black Sabbath’s influence:

The bands that have emulated Black Sabbath most closely (like The Obsessed) are typically known as “doom metal.”

In the 1970s, who was the most physically attractive musician?