Muiris Mac Cartaine: –
Phil Lynott is featured in almost every issue of Classic Rock Magazine, mostly part of the cover story no less.

Thin Lizzy are considered one of the greatest bands in the world of all time in IRELAND because that is where the band formed in Dublin, Ireland.

They have plenty of admirers in the U.K. too and have grown in stature since their too early demise, not just because of their musicianship but because of Phil Lynott’s song writing, which has aged so very well. 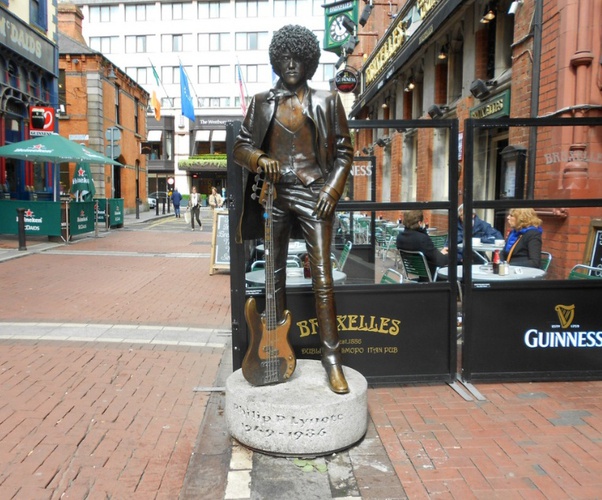 The musicianship and melodic rock was always appreciated but maybe Mr Lynott, as a Black Irish man fronting a hard rock band, had a more unique outsider’s view of society than some of the subject matter of other more successful hard rock bands. Lifestyle choices affected their success in the U.S., Phil pulling out early of two high profile support tours early, in ’76 & ’77 after their breakthrough single The Boys are Back in Town, due to health issues.

There’s also a large stripe of Celtic imagery, romantic vulnerability and working class themes; in all Thin Lizzy are a rather unique package and have continued to gain fans since their early demise.

The Rocker, an early classic with Eric Bell

Thin Lizzy are considered one of the greatest bands of all time in Ireland, Guitars, Drums & Vision, what else do you need, the rest of the world just needs to catch up!

Who played that awesome riff on Michael Jackson’s “Beat It”, & how did that collaboration happen?

Why were there so many more amazing British rock bands in the 60s and 70s than there were American?