Why did Freddie Mercury mention Jimi Hendrix in his song, ‘The Miracle’? Robin Meadows

The reason Freddie Mercury included Jimi Hendrix in lyrics of “The Miracle” is because he was not just a HUGE fan but was largely inspired to become a singer and legend by Jimi. Although the song was mostly written by Freddie and John Deacon it was attributed to “Queen” as agreed for their last albums and everyone did contribute some to the lyrics.

Brian and Roger have also mentioned Jimi as a very big inspiration for them as well. (I can’t recall whether John has named Hendrix as an influence so help me out in the comments if you know.) Roger said that while he and Brian were very big fans of Hendrix themselves Freddie was a “massive” Jimi Hendrix fan and that their shared love and enthusiasm for Hendrix helped draw them to Freddie when they had just met him. On the day that Jimi died Freddie and Roger closed their Kensington Market clothes stall out of respect and that Freddie was devastated.

While Freddie loved to sing as a youngster and would sing for his parent’s friends even as a toddler he did not become serious about becoming a rock star or legend until he went to a Jimi Hendrix concert in London while in college. Even though Freddie could hear a new song on the radio once then sit down and play it perfectly on the piano and created a band called “The Hectics” as a teen at his boarding school that made the local girls scream as if they were the Beatles he still did not take the idea of becoming a professional musician seriously until seeing Jimi Hendrix in action. Who knows if he ever would have become inspired enough to make the grueling commitment to becoming a rock icon if not for Jimi?

Taken from another answer of mine about Freddie’s influences: “As a teen later living in England, he became obsessed with Jimi Hendrix and said that Jimi was the complete package as a performer making him realize that as a performer one ‘either has it or doesn’t. He saw something like 14 of his concerts in a row having to travel for some but refusing to miss any and this was said to be one of the reasons he was almost kicked out of Ealing College for poor attendance. Ealing classmates recall that he drew and painted pictures of Jimi both for classwork and outside of class. He began dressing stylishly like Hendrix which was an improvement as he had worn the same uncool clothes that he’d worn in Zanzibar up until then. He decided to pick up the guitar and started teaching himself to play. One college classmate recalls that when a bunch of enthusiastic but amateur guitar players got together to jam Freddie could soon outplay them all.”

Here’s one of the sketches and paintings that Freddie drew of Jimi while an art student: 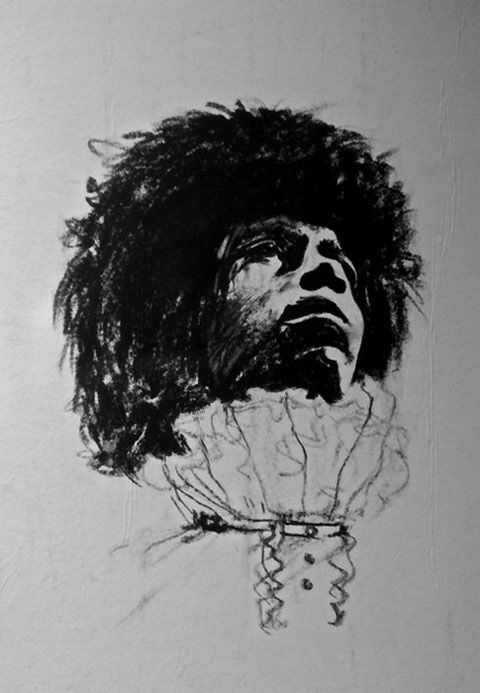 Which popular bands had one particular member who basically ‘made the band’? Brian Abraham ·